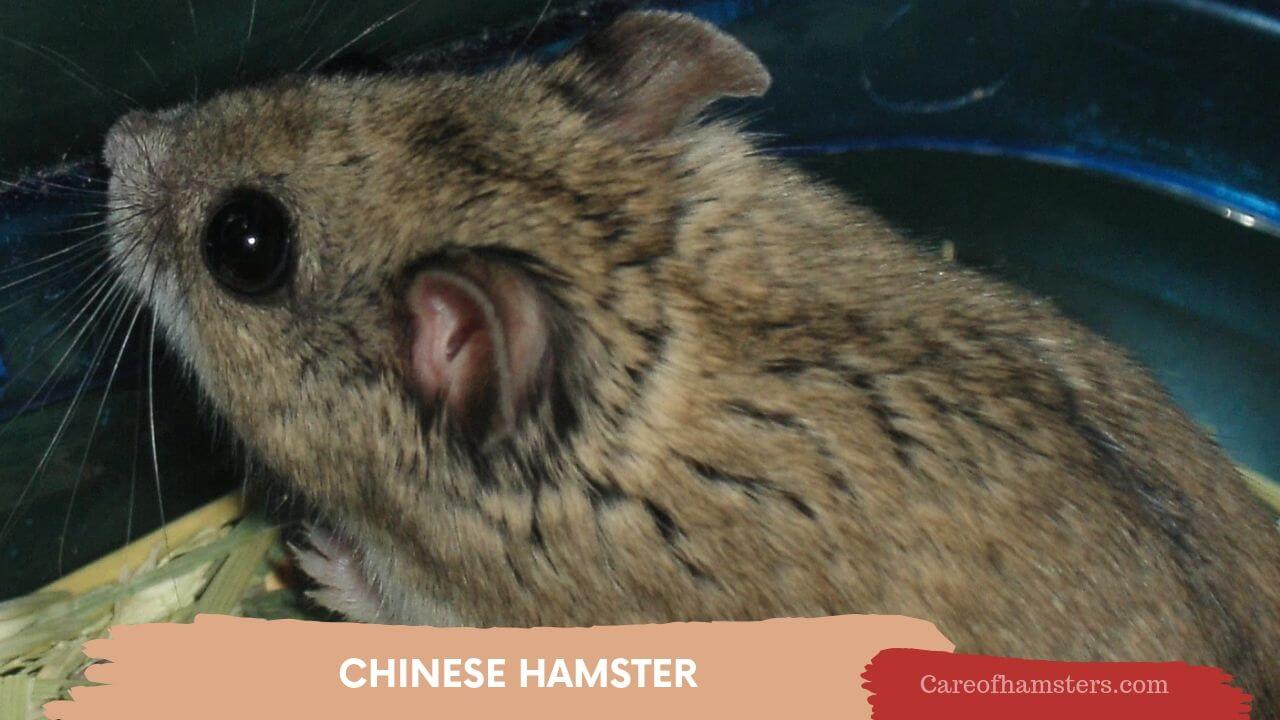 However, many other hamsters are considered 'dwarf' because of their size.

The Chinese dwarf hamster is one of the most popular species of hamster. Some people think they're just smaller version of Chinese Hamsters, while others consider them different races completely.

Location (where can be found):

Chinese hamsters are available in many pet shops. They are sold in pairs and make lovely pets which have a gentle, shy nature.


Chinese Hamster comes under the description “dwarf hamster” as they grow no longer than 3.5 in (9 cm) long. This makes them the longest of the dwarf hamsters currently kept as pets.

Their bodies are longer and thinner than Russian Dwarf hamsters. They come in two colours, the natural agouti or brown with a dark brown stripe down the backbone and dominant spot, which is mainly white with patches of brown. The stripe can still be seen, but is often broken by the white patches.

Chinese Hamsters are shy in nature and very quick, but with patience they can become quite tame. When they are accustomed to you, they will cling to your fingers rather than scurry over them as some hamsters do.

Chinese dwarf hamsters are sold in pairs because dwarf hamsters live in social groups in the wild. The males are easy to tell as their testicles are usually seen clearly, so there is less likelihood of being sold a male-female pairing by mistake.

Two females or two males can live together, but all dwarf hamster owners should be aware that their hamsters may fall out and have to be split into separate hamster cages.

Squabbling is normal, but sometimes it gets more serious. One or both hamsters exhibit bite marks or wounds. You will hear them chatter at each other when they fight, as a warning, but it can be difficult to separate them if they are locked together.

Chinese dwarf hamsters require a small barred cage (often called mouse bars) so that they cannot escape. A good alternative is an old fish aquarium, well-cleaned and with a mesh roof fitted. The aquarium will have plenty of space for toys and items of interest.

They eat normal hamster mix and enjoy vegetable treats such as cucumber, carrot and lettuce. Hamsters should never be offered human chocolate. It is best to feed in small amounts so that the food is not stored and does not go off. They require fresh water daily.

Chinese hamsters have been kept by breeders in pairs or colonies. Colonies however can be cruel to the weaker hamsters who will be bullied sometimes to death. Keeping hamsters in pairs to breed can lead to a litter of babies every three or four weeks.

The female hamsters can be very bad-tempered when pregnant and the males may be attacked. It is best to leave breeding Chinese hamsters to those who know what they are doing.

Chinese hamsters are healthy with relatively few ailments. They can sustain bite wounds and scars from a partner and develop cancer tumours. They can live up to three years and are the longest lived of the hamsters available as pets.

They can make lovely pets and if cared for properly will give you lots of enjoyment.

Are they a part of dwarf hamster family?

Where do they come from?

According to scientific report the first Chinese hamster was sold as a pet in Beijing, China. Did you know that this Chinese hamster technically know as Cricetulus griseus, and there are 12 species in that genus. However only the cricetulus is kept as a pocket pet.

Hamster’s body is gray, brown-gray or grayish black in color with soft fur and longer tail. With gray ears and striping of dark dorsal from the top of the head to the tip of the tail with a light gray to ivory belly. Their beautiful eyes are black.

They often are 4 to 5 inches in length and weigh a tad more than 1 ounce. Females tend to be about 10 percent smaller and very territorial.

As the Chinese hamster originated from the northeastern part of dry open country has developed the characteristic of being a good digger and is capable of digging tunnels more than three feet deep. The burrow is found at the end of the tunnel with several chambers for storing food and nesting materials.

The Chinese dwarf hamster being a very territorial animal uses its scent glands to mark their nests. When threatened or confronted they will throw themselves on their back and display their sharp incisors and chatter and grind their teeth.

As they are very territorial, it's best to be individually housed. In the wild they are not sociable and in captivity can be intolerant of other hamsters.

This animal has a special characteristic of huge cheek pouches internally, and when completely filled up on both sides, its head appears to make up one third of its body overall size.

Diabetes may spontaneously develop from a hereditary trait in hamsters. As they also only have 22 chromosomes, being a very low number, makes them a target for research in genetics, hormone and disease research.